It’s a fair guess that few were surprised that two of TRSA’s most active and resourceful leaders, Michael Potack, president of Unitex Textile Rental Services and John Schultz, sr. manager of water, energy and wastewater solutions, Ecolab Textile Care Division, were recognized with the Operator and Associate (Maglin/Biggie) awards.

“His ability to understand the marketplace and anticipate change has led his company, TRSA and even his competitors to new heights,” said Patrick Dempsey, of Dempsey Uniform & Linen Supply, a past award-winner who introduced Potack. “He is loyal, trusting, supportive and most importantly, inclusive. Inclusive means he’s willing to share (noncompetitive information) with anyone who asks him for help. He has 40-plus years of passion, hard work and dedication and he has left an incredible mark on this industry.”

As for Schultz, Immediate Past Chair Jim Doro, Doritex Corp., praised Schultz’ many contributions based on his skills and knowledge, noting that, “He has earned the respect of laundry operators and associates as a friend and a colleague.” 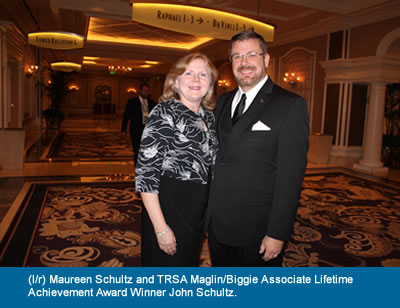 The announcements of award winners in several categories is a highlight of the association’s Annual Conference program, including this year’s edition, which also featured more than 50 vendor exhibits, combined with educational and recreational programs at the Bellagio on the Las Vegas Strip from Sept. 29-Oct. 1.

Potack thanked his wife Randi for helping Unitex achieve remarkable growth since he joined the family business in the mid-’60s. Potack also credited her with helping him achieve leadership roles in TRSA and on the boards of several large healthcare institutions. “Without your help Randi, this never would have happened.”

Potack also acknowledged sons David, Rob and the Unitex team, which he noted is now 100 times larger than when Michael started working there. He thanked his third son Jon, “a triple-board certified physician heading up a major practice in New York,” for providing guidance and support as well, from outside the industry.

Now that the long-sought unification of UTSA and TRSA is well established, the combined organization is stronger than ever. “TRSA is the outcome of two very significant industry associations,” Potack said. “It was not an easy go at first, the second or even the third time. Today, that’s all history. And instead of representing lines of business, we truly represent a vibrant industry.”

Potack added that the textile services industry is an unmatched example of a U.S. industry where energy-conservation, HR and other noncompetitive information is exchanged freely among scores of operators and suppliers to advance the industry as a whole. He likened TRSA to recently retired New York Yankees player Derek Jeter, who represents “everything that’s right with baseball.” “TRSA is the face of our industry and stands for all things that are right in our industry,” Potack said.

As for areas where there’s still room for improvement, Potack said the industry should be more out front about the good things it’s doing in areas such as environmental compliance and preparation for issues such as the recent Ebola outbreak.

The industry is prominent in pioneering efficiencies and improving quality and customer service, he added. Next year, operators will get to see an example of this progress when Unitex hosts a visit to its plant in New Brunswick, NJ, as part of TRSA’s 2015 Healthcare Conference. While that operation is already on the cutting edge of technology, Potack said he hopes visitors will point out areas that need improvement. “We want to learn,” he said. “We want to grow. We want to be better.”

In his remarks, Schultz cited his life’s three passions: his wife and family, wastewater (“Because the world’s full of it,” he quipped) and education.

Schultz thanked Ecolab management for encouraging and supporting his efforts to educate laundry operators on a variety of water-related technical topics.

Doro noted that Schultz has long taught classes at the Production Management Institute and at the Maintenance Management Institute, as well as at summits and webinars. He’s also contributed numerous articles to Textile Services and has served on various committees and task groups related to wastewater management and similar topics. “We’ll continue the drive to make sure that we can educate the industry along with TRSA in a partnership,” Schultz said. “Thank you very much.”