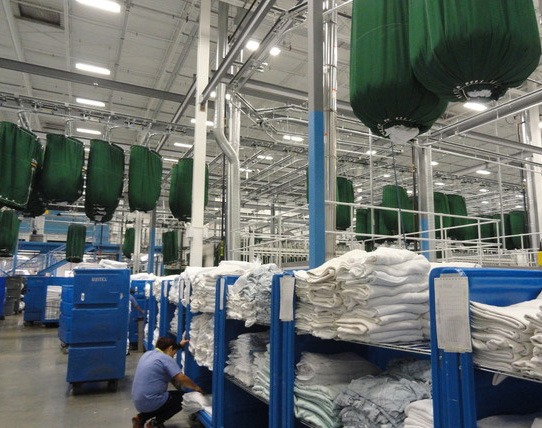 Unitex launders hospital and medical facility linens and uniforms at its new 100,000 sq. foot plant, staffed by 300 people, most of which are local, officials say.

With the opening of the New Brunswick location, Unitex now operates 11 facilities in New Jersey, New York and Connecticut.

The company is family run, and has been since it was founded more than 90 years ago, according to Vice President of Sales and Marketing David Potack, who works alongside his father, company president and CEO Michael Potack, and brother, Robert Potack, who serves as Vice President of Operations.

At the opening ceremony on Thursday, Potack said the addition of the New Brunswick plant was to accommodate growth in the company, and praised the setting of New Brunswick as being supportive of its businesses.

Inside the plant, workers were busy sorting thousands and thousands of pounds of linens alongside automatic machinery that moved and sorted the linens through the plant.

Slings hung high in the air can hold more than 200 pounds of laundry, and workers on the ground can feed sheets and towels into folding machines at high speeds: 500 fitted sheets per person, per hour, for example.

Potack said that in addition to it’s cutting edge machinery, Unitex is recognized for its embrace of green energy.

According to the company, Unitex laundry facilities are able to process 200 million pounds of laundry each year using less than a gallon of water per pound.

An average household washer uses 2.8 gallons per pound, according to Unitex.